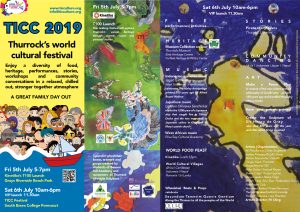 T100 lunch follows before the character of Samuel Pepys (Mike Ostler) leads the food trail off on a two week walk around South Essex. There will be a World Food Feast that includes Nepalese, African, Asian, European cuisine.

Activities at TICC Festival on 6th July are as follows, some linked to historical anniversaries.

Have your portrait painted by Ginger Kara.